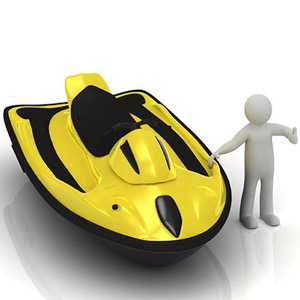 Jet skis are a popular personal watercraft enjoyed by both tourists and residents of South Florida, but when jet skis are not properly handled or maintained, this can result in accidents that cause severe injuries. If you were involved in a jet ski accident, you may be owed compensation from one or more parties whose behavior caused the accident, and it is vital to engage an assertive attorney who will fight diligently on your behalf to help you recover compensation. Fort Lauderdale jet ski accident lawyer Joseph I. Lipsky is skilled at handling personal injury lawsuits in the Florida courts and will develop persuasive arguments in your favor to help you prove the liability of the party responsible for your accident.

Florida Laws Regarding the Use of Jet Skis

The Florida legislature has enacted laws regarding the safe use and operation of personal watercrafts, which include jet skis. For example, people are prohibited from operating jet skis during the time from a half-hour after the sun sets until a half-hour before it rises the following day. Additionally, anyone using a jet ski is rezquired to operate it prudently and reasonably. Operators are expressly prohibited from engaging in certain reckless acts, such as weaving through high traffic areas, swerving at the last minute to avoid a collision, and jumping close to other watercrafts. It is also unlawful for the owner of a jet ski to permit a person to operate the jet ski if the person has not been properly instructed as to how to safely handle a jet ski. A jet ski accident attorney in the Fort Lauderdale area can investigate whether a violation of any of these rules may have resulted in an accident.

Jet ski accidents can be caused by numerous factors. If the operator is inexperienced at handling a jet ski, or inattentive, he or she may lose control and cause an accident. Additionally, the operator may be impaired by drugs or alcohol or may lack the skills necessary to operate a jet ski properly. In some cases, the operator may fail to abide by one of the laws regarding the safe use of a jet ski, thereby causing an accident. Additionally, jet ski accidents can be caused by a malfunction in the jet ski itself, which may be caused by a manufacturing or design defect, or improper maintenance.

If you were injured in a jet ski accident, determining who may ultimately be held responsible for your harm depends on how the accident occurred. For example, if a defective jet ski caused the accident, a Fort Lauderdale jet ski accident attorney may be able to seek compensation from the manufacturer or distributor of the jet ski. If the accident was caused by the reckless operation of the jet ski, you may be able to pursue claims against the operator of the jet ski, and if the owner is someone other than the operator, the owner as well.

In most cases, personal injury lawsuits arising out of jet ski accidents assert negligence claims against the defendants. To establish negligence under Florida law, you must show that the defendant owed you a legal duty to act in a certain way, and the duty was breached. You must also show that the breach was the cause of your harm and that you suffered actual damages. In cases in which a duty is established by law, showing a legal violation will support a claim of negligence.

Consult a Capable Fort Lauderdale Attorney About Your Accident

Jet skis can provide hours of entertainment, but when they are not operated in a proper manner, they can cause serious harm. If you were injured in a jet ski accident, it is critical to speak with a capable personal injury attorney regarding your accident and the claims that you may be able to pursue. Joseph I. Lipsky is a proficient jet ski accident lawyer in the Fort Lauderdale area who can advocate aggressively on your behalf to help you seek recourse for your harm. Mr. Lipsky regularly represents people harmed in jet ski accidents in cities throughout Broward, Palm Beach, Miami-Dade, Orange, and Monroe Counties, including Fort Lauderdale, West Palm Beach, Miami, Orlando, and Key West. We have offices in Plantation, Miami, West Palm Beach, and Delray Beach and can be contacted through our form online or at 1-888-352-5298 to set up a confidential and free meeting about your accident.